It's been a bit manic.

The last few weeks have whizzed by. We were insanely busy getting the Etsy Craft Party sorted. Then I had to get my VAT return done (I hate it, but at least it means I'm never more than 3 months behind on accounts work...). Things started to return to normal last week. We had a lovely knit & natter on Thursday with three new faces. Then Saturday came, and with it back to back workshops, with beautiful cushions and lamp shades being made. 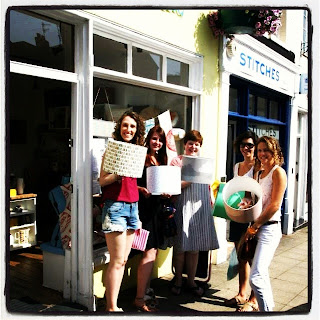 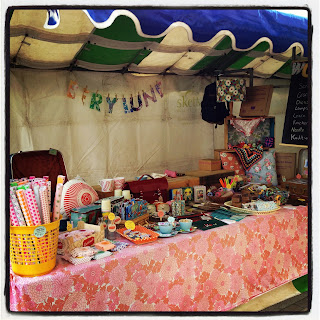 Sunday was Independent's Day in Leamington, so we had a stall on the parade (no live tennis for us!) in the beautiful sunshine. But we had managed to triple book ourselves, so Amy had to head down to the shop to run a Birthday party for eight 10 year olds! I think I drew the long straw being on the market stall, especially when Charlotte turned up to help keep me fed and watered. In the blistering heat, Amy and Denise had great fun making purses, blowing out candles, eating egg and cress sandwiches and getting generally sticky! Nic kindly opened up the shop for us.

Amy and Denise were a bit too busy to take any photos, so I can't show you the smiley faces, pretty purses, milk shake in bottles with stripey straws, cheese and pineapple on sticks, popcorn bags or fabulous, fabulous party bags we put together. But those of you who came to the craft party will no doubt get the idea! Above is the double chocolate button cake Amy made, prior to candles. YUM.
To avoid further scheduling conflicts, today Amy did this: 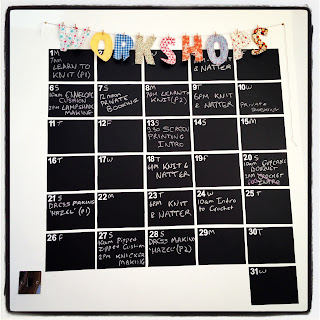 I've seen really expensive versions of these, but we got all of the materials together for under £10. Genius. Of course, even if we had remembered we were supposed to be in three places at once, we probably would have done it anyway, but at least now we will have a better idea of what lies ahead.

This evening, we upped sticks and moved knit and natter to the park so we could all sit in the shade. We took a big flask of squash, loads of cake and a number of blankets. We managed to avoid unwanted attention from dogs, squirrels, birds and trees. We left a note on the door, I hope it was still there and no-one was left behind! 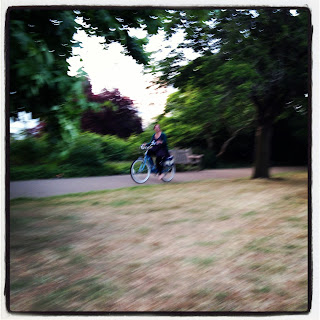 Charlotte whizzing around on Amy's bike 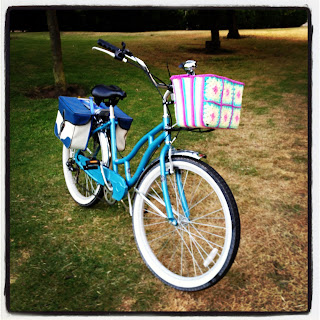 Amy's newly crocheted bike basket cover!
I, for one, am looking forward to a few days of calm. Oh, and those of you who knit with us might want to join our Ravelry group?
Berylune, 45 Park Street, Leamington Spa CV32 4QN. www.berylune.co.uk