Are you a member of the Tufty Club?

About a year ago, when we were daring each other in to opening a shop, we found something fabulous at a market. I was digging through a pile of stuff when I came across a bag of fabric backdrops and animal shapes. We vaguely recognised them, but couldn't put our fingers on where from. So we bought it, because we liked them.

We got home and spread them all out. The fabric backdrops were illustrated road scenes and the animal shapes were of badgers, squirrels, weasels etc, driving a car or crossing the road. Amy put her finger on it, they were animals from the Tufty Club. What we had bought would have made up a primary school wall frieze to help children learn about crossing the road - before the green cross code man even existed. They're a bit difficult to date, between 1953 and the early 70's according to this. Either way, we think they're cool. 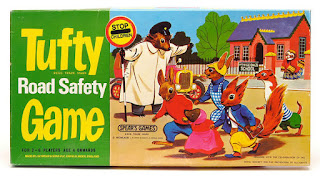 A Tufty Club board game
They have been in our stores, waiting for a project, since we opened last May. Finally, Amy has sewn them on to brightly coloured book bags (red, orange, yellow and blue, in that order), which are now for sale in our shop! 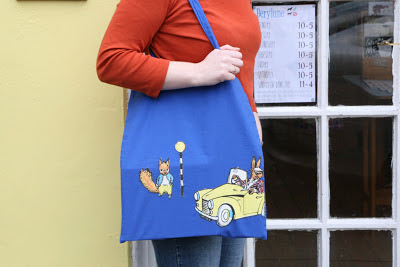